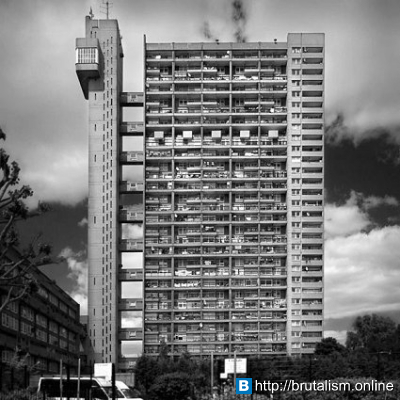 Trellick Tower is a 31-storey block of flats in North Kensington, Royal Borough of Kensington and Chelsea, London, England. It was designed by architect Ernő Goldfinger, after a commission from the Greater London Council in 1966, and completed in 1972. It is a Grade II* listed building and is 98 metres (322 ft) tall (120 metres (394 ft) including the communications mast).

Goldfinger's design is based on his earlier and slightly smaller Balfron Tower (in Poplar, east London), and is in effect a sibling building. It has a long, thin profile, with a separate lift and service tower linked at every third storey to the access corridors in the main building; flats above and below the corridor levels have internal stairs. The building contains 217 flats and was originally entirely owned by the GLC with the flats rented as council flats. Shortly after its completion the building was transferred to the local council (the Royal Borough of Kensington and Chelsea). Most of the flats are still social housing, but a significant minority are now privately owned.

On 8 October 1984 a new residents' association was formed. As a result of pressure from the occupants, several security improvements including a door entry intercom system and the employment of a concierge were undertaken from the mid-1980s. Property prices rose and flats in the tower came to be regarded as highly desirable residences by some people, despite the slightly gritty edge which remains. Private properties inside the tower have sold for between £250,000 for a one-bedroom flat to £480,000 for a fully refurbished three bedroom end apartment (with views on three sides) at the peak of the market. The tower itself has become something of a local cult landmark and was awarded a Grade II* listing in 1998.

In December 1989, four low power television relay transmitters with aerials were added to the existing communications equipment on the top of the lift tower. This was to solve reception problems for some residents of adjacent districts, including Notting Hill and Westbourne Grove. The transmitter installation is referred to by the BBC and Ofcom as "Kensal Town".

The projection at the top of the services tower is the plant room. The majority of the plant is located at the top of the tower. The grouping together of the boiler and hot water storage tanks reduces the need for pumps and reduces the amount of pipework needed. Shorter pipe runs also reduce heat loss. The oil-fired boilers originally used became obsolete due to the 1973 oil crisis, the year after the tower opened. The flats now have electric heaters and the plant room although disused, still houses most of the now defunct plant. A planning application was made to convert it into a penthouse apartment but was refused by the local council.

Serious problems exist with the existing facade system. The building was designed several years before the 1970s energy crisis, and the facade system does not manage heat at all. The facade of the tower is formed of two parts, the concrete brutalist structure, and wood and glass assembly storefront systems. Many of the original single panes of glass have been replaced either with double glazing in the existing wood frame, and plexiglass. The overall result is a minimal improvement in thermal performance. Overall the wood facade elements are warped, cracking, and do not seal well. The single layer construction bleeds heat at an appreciable rate. Further, the concrete elements bridge from the outdoors to the indoors, conducting heat from the interior to the exterior, where the concrete acts as a heat fin in a phenomenon called a Thermal bridge. Although the managing agents on behalf of the Council, Kensington and Chelsea TMO are aware of the issue, the building is beyond their budget to upgrade, and leaseholders are left to deal with the building's condition, unable to upgrade themselves - the facade must be managed as a single entity due to the Grade II* listing. The overall cost to the building for refurbishment is in the order of £30m (£100,000-£120,000 per flat) as of 2013, a cost to be borne by KC-TMO and the leaseholders on an flat-by-flat basis. In addition, £22,000 of additional (per flat) charges are outstanding for basic internal maintenance. 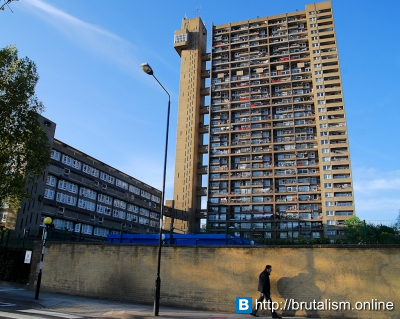 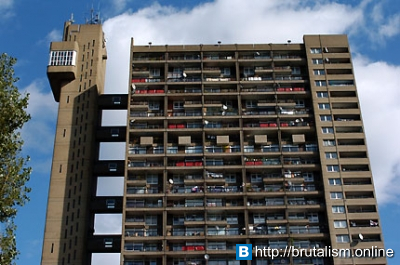 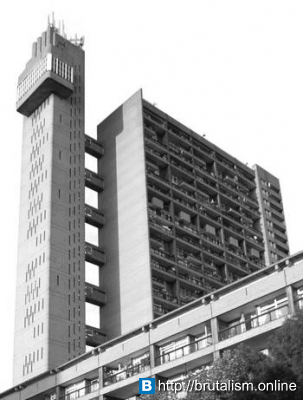