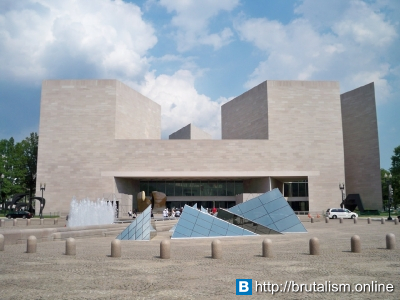 The National Gallery of Art, and its attached Sculpture Garden, is a national art museum in Washington, D.C., located on the National Mall, between 3rd and 9th Streets, at Constitution Avenue NW. Open to the public and free of charge, the museum was privately established in 1937 for the American people by a joint resolution of the United States Congress.

The Gallery's campus includes the original neoclassical West Building designed by John Russell Pope, which is linked underground to the modern East Building, designed by I. M. Pei, and the 6.1-acre (25,000 m2) Sculpture Garden. The Gallery often presents temporary special exhibitions spanning the world and the history of art. It is one of the largest museums in North America.

The museum comprises two buildings: the West Building (1941) and the East Building (1978) linked by a spacious underground passage. The West Building, composed of pink Tennessee marble, was designed in 1937 by architect John Russell Pope in a neoclassical style (as is Pope's other notable Washington, D.C. building, the Jefferson Memorial). Designed in the form of an elongated H, the building is centered on a domed rotunda modeled on the interior of the Pantheon in Rome. Extending east and west from the rotunda, a pair of high, skylit sculpture halls provide its main circulation spine. Bright garden courts provide a counterpoint to the long main axis of the building.

In contrast, the design of the East Building by architect I. M. Pei is rigorously geometrical, dividing the trapezoidal shape of the site into two triangles: one isosceles and the other a smaller right triangle. The space defined by the isosceles triangle came to house the museum's public functions. That outlined by the right triangle became the study center. The triangles in turn became the building's organized motif, echoed and repeated in every dimension. The building's most dramatic feature is its high atrium designed as an open interior court, it is enclosed by a sculptural space frame spanning 16,000 square feet (1,500 m2). The atrium is centered on the same axis that forms the circulation spine for the West Building and constructed in the same Tennessee marble. Starting in 2005, the joints attaching the marble panels to the walls began to show signs of strain, creating a risk of panels falling off the building onto the public below. In 2008 officials decided that it would be necessary to remove and reinstall all the panels. The project is scheduled for completion in 2013. 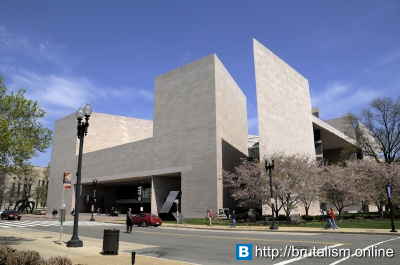 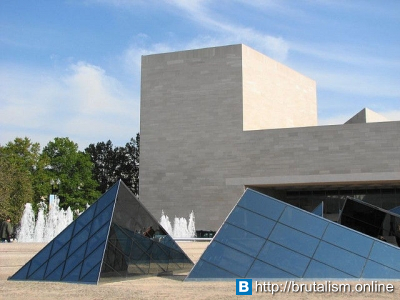 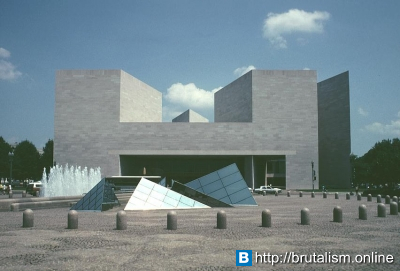 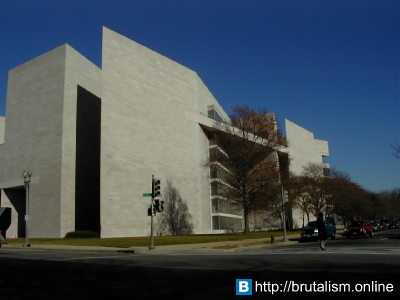