In last week’s post, we left Balfron Tower just as its first residents were moving in, among them the Tower’s architect, Ernő Goldfinger, and his wife, Ursula.  That affluent couple moved out after a couple of months.  It’s a cruel irony that Balfron Tower, conceived in the twentieth century as decent housing for ordinary people, will in the twenty-first become the preserve solely of the most wealthy.  How did it come to this?

Back in 1968, the champagne parties thrown by the Goldfingers for their neighbours made it easy for some to condemn their stay as a piece of show-boating by a wealthy couple who would soon return to Hampstead but Goldfinger was serious in his intention to discover the strengths and weaknesses of his design.  This is clear in his own account and in the careful notes drawn up by Ursula – even if they do smack a little of an ethnographic exercise in participant observation. (1)

For instance, good on detail, Ursula noticed how difficult the heavy swing doors to the bridges were for those with parcels or a pram.  And the access corridor was ‘appallingly cold in an East wind’.  These comments are tempered by her observations of the community: ‘everyone was helpful with the doors, not just to me but with each other or a child, or anyone at all’.  And that cold corridor was:

well kept, I have never seen rubbish in it at any time of day. Milk bottles are left outside the doors all day as people are at work, never turned over or broken. Some people have door mats outside, I have not yet heard that one has been stolen. This happened to me and friends of mine in Hampstead.

As regards the flats themselves, those she had visited were ‘ beautifully kept, people are going to a lot of trouble to install them mostly with outrageously terrible furniture, carpets, curtains and ornaments’ – although she did add that she didn’t think the fabric designs ‘much worse than those I see at the Design Centre’.

We might mock the condescension here and feel unsettled by her surprise that working-class people could actually behave rather well but it is worth making the point that this was a respectable and law-abiding community.  If things went wrong later, this wasn’t the result of some original sin in the building’s design.

Some of the early faults were corrected. Ernő noted copper gaskets on the windows which made a ‘trumpeting noise’ in the flats when winds were high (they were replaced) and the need for thresholds on front doors (which were added), for example.  They both noted – the eternal problem of municipal high-rise – the inadequacy of the lifts and he added an extra lift to his plans for Trellick Tower, Balfron’s sister in north Kensington completed in 1972.

In general, Balfron seems to have been popular in their early years.  According to Ursula, one woman stated of her flat that she ‘wouldn’t change it for Buckingham Palace’.  Ursula continued:

But three months after the Tower’s opening Ronan Point collapsed and the love affair with high-rise was very near its end.  Moreover, Balfron would not be immune from the social and environmental problems which afflicted council estates up and down the country from the late seventies.

For those who hated high-rise and hated in particular the uncompromising architecture of Balfron, the lessons were obvious: ‘high-rise living, at its worst, can be a ghastly and isolating experience’. (2) An intrepid reporter sent to the Tower found evidence to back this up: a 59-year old resident living alone on the top floor felt like ‘a battery chicken in a box’; he didn’t know his neighbours and had been burgled twice.  A young single mother complained, understandably, how badly being ‘cooped up in the flat all day’ was affecting her two pre-school children. 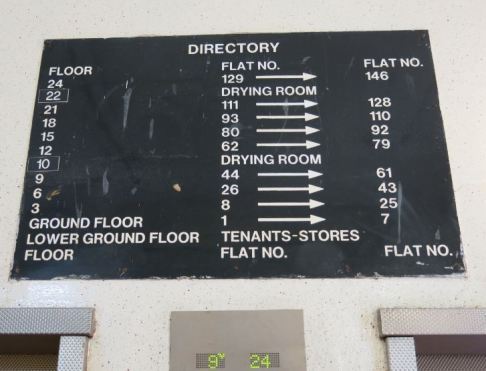 There were criticisms too of poor maintenance.  On the abolition of the GLC in 1985 the Tower was transferred to the London Borough of Tower Hamlets.  Its new caretaker described it as ‘a disaster area…burnt-out cars, black soot stains, bin rooms full of old rubbish’. (3)

For all that, Balfron was never as notorious or troubled as Trellick – the same source describes it as having ‘had a boring life’ and possessing a more stable community – and it seems to have recovered quickly.  CCTV was installed in 1990 and that caretaker later reported few problems with vandalism: ‘I know all the kids, who their mums and dads are. I’ll knock on someone’s door if I’ve seen them doing something’. 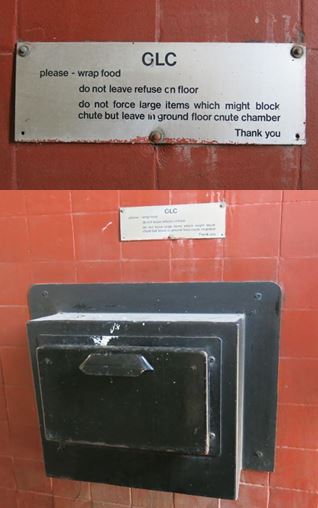 Balfron has worked, not for everyone and not all the time – not a modernist utopia for sure but a decent home to most of its residents.  It stood the test of time structurally too.  There was no experiment with system-building here and the concrete fabric is described as being ‘in good condition’ and many of the internal finishes ‘surprisingly resilient’.  That solid concrete – ‘spine walls and slabs that pass straight from the inside to the outside’ – does make for very poor thermal insulation, however, and requires substantial work to meet modern standards. (4)

Doorway. The original residents didn’t like the letterbox doubling up as a door knocker and installed electric bells with trailing wires much to Goldfinger’s disappointment

It was Grade II listed by English Heritage in 1996 and ownership was transferred to the local Poplar HARCA housing association in 2006 after one of those ‘an offer that can’t be refused’ ballots that marked the housing stock transfers from councils to housing associations of the time.  Tenants were promised new kitchens, new bathrooms, a whole range of repairs and improvements – basically the kind of necessary upgrade that local councils were financially unable to offer.

Poplar HARCA also planned to build 130 new low-rise homes on the Brownfield Estate for which Tower residents would have priority. If they moved out, their former flats would be sold to help finance the overall programme of redevelopment. (5)

One or two households were still holding out in September 2014

In 2010 it became clear – belatedly, it might seem – that the building’s repair and refurbishment would require all tenants to be – in that chilling bureaucratic phrase – ‘decanted’.  And the rules of the game changed.  The option for tenants to return to improved homes has been removed; all flats are now to be sold on the open market.

Poplar HARCA reckons it will spend £137,000 on each flat – an expensive job made more expensive by the need to safeguard the architectural integrity of a listed building. In December 2013 Londonewcastle, which describes itself as ‘a luxury residential property development company’, was awarded the contract to do the work.  In the words of its website: (6)

Understandably, the City types who move in (Canary Wharf is so close) or the speculators that buy won’t want poor people sullying their space.

In the meantime, as Balfron has emptied (one or two families are still holding out), its flats have been let out to property guardians and artists.  This brings in a little income, it provides a little security but it’s hard not to see all of them as an insidious gentrifying vanguard – embedded agents of regeneration, in the words of one critical participant. (7)

The kind of ‘urban renaissance’ proposed for areas such as Poplar nowadays rests on conspicuous consumption and the affluence of middle-class incomers.  It displaces and marginalises existing communities.  By way of contrast, look just to the west, go back sixty years, and see a different world, different priorities – the Lansbury Estate, a council estate built in 1951 to meet ‘the needs of the people’ and the model then of a better and more democratic future. 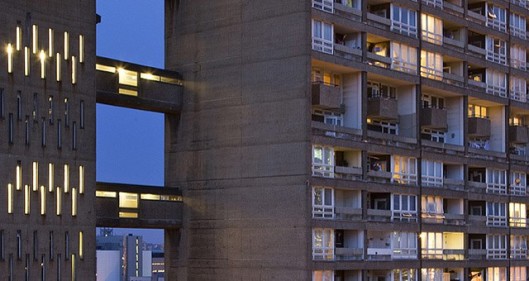 ‘Local housing association Poplar Harca has been seeking a partner to give a new lease of life to the 145 apartments in the late-1960s brutalist block designed by architect Erno Goldfinger for the Greater London Authority’. Image and blurb from the Londonewcastle website

Defenders of Poplar HARCA would argue they are doing their best to work the system – a sell-off of prime real estate here, some replacement social housing there.  The rules require that we sell off homes in the social rented sector to maintain the ones we have. The same rules imply that some homes are too good for ordinary people.  And, in practice, those rules break up communities and disperse too many tenants far from their original homes and neighbourhoods.

There may be some good people trying to make those rules work as effectively as possible for those that need housing.  But many more are making a quick buck and the rules need changing.  We have come to accept our society’s divisions and the exclusion of our poorest neighbours. The need to defend existing social housing and build anew has rarely been so stark.

As Balfron Tower, built to provide good quality and affordable housing for the ordinary people of the borough, is set to become a plaything of the hip and wealthy, there are 23,500 households on the waiting list for social housing in Tower Hamlets; 1500 households, officially homeless, are living in temporary accommodation. (8)

Its sell-off is a loss of housing for those who need it most.  For the rest of us, it’s a loss of common purpose and decency.

(2) George Tremlett, Conservative housing policy director on the GLC, quoted from a speech to RIBA in the East London Advertiser, 21 July 1978.  The following quotations come from the same source.

(4) Will Hunter, ‘The future’s golden for Balfron’, BD Magazine, October 2008.  The quotation is from Greg Slater of PRP Architects who are consultants on the refurbishment.

(8) Tower Hamlets Citizens, ‘Tower Hamlets. A Report on the Housing Crisis in one of London’s most expensive boroughs’ (2014).  For detail on the attempts to remove tenants from the waiting list, read James Butler, Social Cleansing in Tower Hamlets: Interview with Balfron Tower Evictee.  The favoured tactic is to use the Rent Deposit Scheme for privately rented accommodation – more expensive and of inferior quality. Thus we spend money on Housing Benefit to subsidise private landlords rather than investing directly in homes.

Rab Harling took photographs of 120 of the flats over three years as a ‘portrayal of a community living with housing insecurity.’  View his slideshow here.