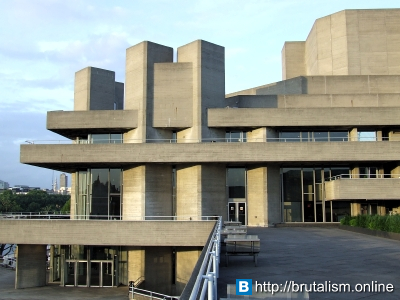 Denys Lasdun's building for the National Theatre – an "urban landscape" of interlocking terraces responding to the site at King's Reach on the River Thames to exploit views of St Paul's Cathedral and Somerset House.

The style of the National Theatre building was described by Mark Girouard as "an aesthetic of broken forms" at the time of opening. Architectural opinion was split at the time of construction. Even enthusiastic advocates of the Modern Movement such as Sir Nikolaus Pevsner have found the Béton brut concrete both inside and out overbearing. Most notoriously, Prince Charles described the building in 1988 as "a clever way of building a nuclear power station in the middle of London without anyone objecting". Sir John Betjeman, however, a man not noted for his enthusiasm for brutalist architecture, was effusive in his praise and wrote to Lasdun stating that he "gasped with delight at the cube of your theatre in the pale blue sky and a glimpse of St. Paul's to the south of it. It is a lovely work and so good from so many angles...it has that inevitable and finished look that great work does."

Despite the controversy, the theatre has been a Grade II* listed building since 1994. Although the theatre is often cited as an archetype of Brutalist architecture in England, since Lasdun's death the building has been re-evaluated as having closer links to the work of Le Corbusier, rather than contemporary monumental 1960s buildings such as those of Paul Rudolph. The carefully refined balance between horizontal and vertical elements in Lasdun's building has been contrasted favourably with the lumpiness of neighbouring buildings such as the Hayward Gallery and Queen Elizabeth Hall. It is now in the unusual situation of having appeared simultaneously in the top ten "most popular" and "most hated" London buildings in opinion surveys. A recent lighting scheme illuminating the exterior of the building, in particular the fly towers, has proved very popular, and is one of several positive artistic responses to the building. 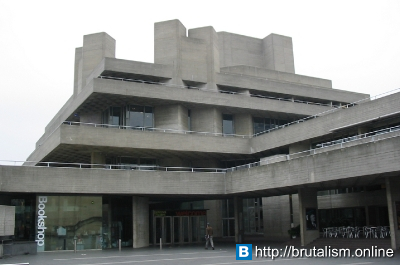 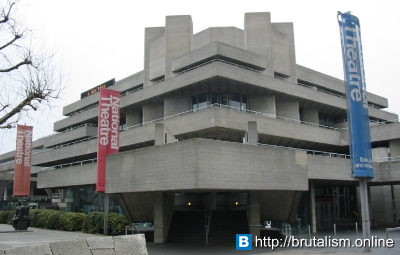 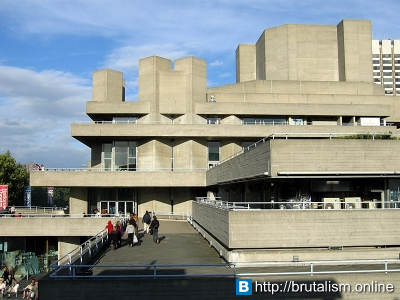